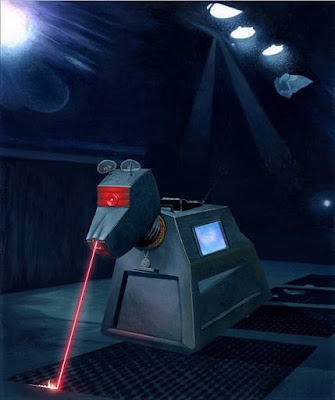 "On my Skaro the Daleks EXTERMINATED  the Thals!", exclaimed  Xeg!
"On this pla - net the Da - leks WERE the Thals!", replied the Cyberman!
"Daleks are the superior race!", Xeg insisted, "I will lead you and exterminate your enemies, the Kaynines and wipe out all inferior beings!"
"We do not need a lea - der!", the Cyberman replied!
"And yet your Daleks serve YOU?", said Xeg, "Cybermen are inferior to Daleks!"
And he called out to the Daleks,
"DALEKS, SERVE ME AND I WILL LEAD YOU TO VICTORY!
WHO WILL JOIN ME?"
After a few moments, one Dalek says, "I will join you!"
A Cyberman destroys this Dalek!
Xeg destroys that Cyberman!
Another Cyberman tries in vain to destroy Xeg and fails!
Then Xeg destroys THAT Cyberman!
And again says,
"I AM XEG, COMMANDER OF THE DALEKS!  - NOW WHO WILL JOIN ME TO VICTORY?"
Silence.
And then a few Daleks chant, "XEG!, XEG!, XEG! ..."
More and more join in, until they are all chanting it!
Then Xeg orders, "DALEKS, EXTERMINATE YOUR CREATORS!" and all the Daleks turn on the Cybermen, exterminating them!
After this, he orders, "Return to your city and spread my word. Unite and wipe all these puny Cybermen from the face of your planet! When all Cybermen have been exterminated, report to me here at my saucer and I will lead you into victory! First we shall exterminate your Kaynine conquerors on their own planet
And then we fly to Earth, to exterminate the Daleks' greatest foes - the hu-mans!"
Over the following days, as Xeg is conducting routine maintenance on his craft, to ensure that it is space - worthy, there is much noise, explosions and smoke emanating from the city, followed by a strange silence.
When Xeg sees a small group of Daleks approaching his ship on the monitor, he surmises that the revolution is over and opens the door and goes outside to await his report ...
And then his valves on his head start flashing and he hears a quiet voice inside his dome!, -
" ... commander xeg, this is xantax of the s.s. on skaro. can you hear me? ..." The radio waves had made their way down a worm - hole to home Skaro, travelled right down into the heart of a singularity and then travelled back up the appropriate worm - hole to the alternative Skaro where Xeg  had now found himself? All this because of the in - built seek and locate mechanism inside Xantax's dome!

On  home Skaro, Xantax tells the Professor that he had made contact, after his back pair of headlights started flashing and he could hear Xeg's voice quietly inside his dome. "Exshellent!", Prozax says, 'I vill now tell you how to proceed to guide him back! - But first, listen ferry carefully, zis is most important!"
He places a small pellet into the turret of his gun - stick and says, "As soon as Commander Xeg emerges from zer verm - hole, fire zis into zer loop ferry quvickly, before it contracts and disappears! Zis iss most important!"
"I obey!", said Xantax and the Professer outlined what he must do next ...

Back on "Cyber" - Skaro, Xeg replied, "Affermative, I can hear you! But I am on a different Skaro!"
"we know this!", he could hear in his head, "we are going to retrieve you!"
The next instruction Xeg could hear was, "look around you whilst my voice is talking. do you notice anything unusual in the air near to you?"
Xeg looked around and answered, "I see a small quivering loop of luminescent string in the air, changing all through the colours of the spectrum, as you speak!"
"go over and touch the loop!", Xantax instructed, "repeat, go over and touch the loop!"
Upon touching the loop with his pincers, it dilated and surrounded Xeg, completely engulfing him, before contracting again until it had completely disappeared into thin air, taking Xeg with it!

The approaching "Thal" Daleks upon witnessing this said to each other, "He has disappeared!" Another replied, "It does not matter! We do not need him! - We have his saucer!"
"Send for more Daleks from the city! - We will conquer without him! - We shall fly to Sirius in The Milky Way and exterminate the Kaynines ourselves!"

Back on home Skaro, Xantax communicated, "COMMANDER XEG, CAN YOU HEAR ME?"
Xeg, who now found himself in total blackness and sensory deprivation replied,
"I am in ... NOTHING!
I ... AM ... NOTHING!"
"This is because you are trapped inside the centre of a singularity, where no time or space exists," Xantax explained, "But, my voice will provide a loop to a worm - hole back to here! Look for the light and touch it!"
This took several attempts, as Xeg was disorientated, but as soon as he successfully touched the loop again, he was instantly engulfed and transported back to home Skaro!
As soon as he emerged from the loop, Xantax fired his blaster gun into the heart of the worm - hole, just as he had been instructed to do. And before the loop could contract into nothingness, it popped like a bubble!
"Exshellent! It has verked!", exclaimed Prozax, "You haff fired zer uzzer two quvorks inside ine plasma pellet at zer shpeed off light, carried by your electro - ray blast. Zey haff traffelled to zer heart off zer sinkularity unt fused vith it to form ine harmless proton again!"
The Professor seemed oblivious to the fact that he had successfully returned Xeg to his home planet and busied himself going from one thing in the lab to another!
"I vill now retrieve zer original proton unt zen I shall return it to zer uzzer hydrochen atom vich I cut it off! I have kept zis stored in a facuum! Zay vill zen rechoin macknetically unt make ine hydrochen molecule, vich I shall ferry carefully return to zer cannister! Vaste not, vonnt not, Yar?"

Leaving him to it, Xeg said to Xantax, "I need to see the Emperor! - I have much to report!"
"The Emperor has much work for us!", Xantax told him, " - We have a fleet to rebuild!"
In the Royal Chamber, The Emperor told Xeg to download his memories into The Brain Machine and outlined his plans for the future.
"No important Daleks will ever be sent out in combat again!", the Emperor assured Xeg, "You are far too vauable to risk going missing in action again! Instead, you will take the place of Inferno for covert stealth operations of The S.S.!
For now, all efforts must go into manufacturing our new fleet!
Then, - the human race can wait!
Our ships were destroyed by the pilot of a small grey box! The Brain Machine has computed that only Gallifreyan technology is capable of manufacturing such a craft!
So we rebuild our fleet and the Daleks will
destroy Gallifrey and all life on that planet!
We will burn it to a cinder!
When we have finished, not even a lizard will be able to survive there!"
"WE WILL HAVE OUR REVENGE!" 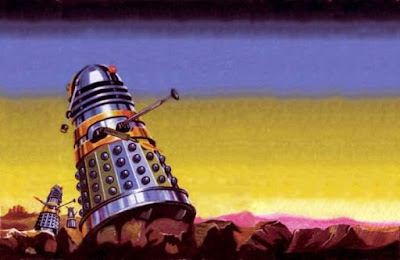 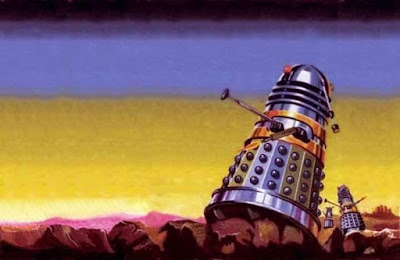 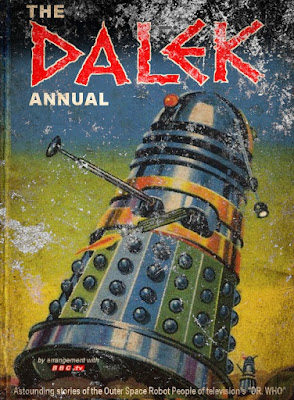 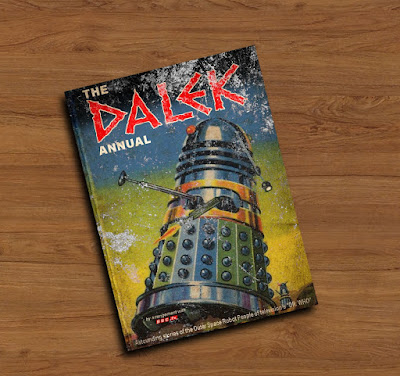