"BACK FROM THE FUTURE!"

We last saw Commander Xeg travelling on his way back to Skaro, alone, for reinforcements, with the the time rewinding back to 2071, from the tale in an alternative universe, but, unbeknown to him, an alternative future has an alternative past as well!
So when he arrived back at what he thought was Skaro, the planet, although appearing almost identical when approaching, had evolved with a completely different version of events to the one that he had left behind........

On the planet surface, in the capital city of this planet that the inhabitants had Christened "Skora", the dominant race, The Delaks had spotted a saucer approaching and had activated their magnetic sand to cover the city and had sent word to their Emperor, informing him that an unknown saucer was heading towards their planet!
And a party of Delaks are sent out to apprehend the occupants of the unidentified saucer when it landed on the sands of Skora, uninvited!
Xeg, believing he was on home sand, disembarked from his craft, but could not believe his eyestalk when he saw what he believed to be a whole garrison of black supreme Daleks travelling towards him! And on closer inspection, all had their two chest appendages on the wrong way around!
"HALT!", one of them ordered, "IDENTIFY!"
"Commander Xeg," he answered, "...The Emperor's Elite Imperial Invasion Corps."
"Does not compute..." this black Delak replied, "...EXTERMINATE!" and fired a blast at Xeg, which simply reflected off his armour!
Then several of these black Delaks all cried out, "EXTERMINATE!" and all fired in unison!
Again, the rays just bounced off and Xeg picked off one of the guards at random, which immediately exploded.
"You cannot destroy me!", Xeg stated, "I am invincible! - But I can destroy every one of you and everyone on this planet!"
"Now! - Take me to your Leader!", Xeg commanded.
"We obey only our Emperor!", a Delak stated and was also instantly destroyed by Xeg.
"If you wish to save the life of your Emperor, you will take me to him! - NOW!", Xeg yelled.
The Delaks complied and said, "Follow us..." as they turned around and led Xeg back into their city in silence...

Once inside the city, Xeg could see that all of these "Daleks" were black, until they took him into a room where there was a green and a white "Dalek". One of the garrison approached the white one and reported, " Delak Supreme, - this red Delak was the occupant of the saucer. He is indestructible and threatens the life of our Emperor if we do not grant him an audience!"
"I am not a Delak, - I am a DA-LEK!", corrected Xeg!
The white Supreme Delak says, "Wait here! I shall see what his Excellency says..." and glides out through another door.
After a while, the white Supreme returns and says, "His Excellency has agreed to see with you. - Follow us!" and an entourage of the White, Green and several black Delaks exited through that same door, with Xeg tagging behind.
Entering the Royal Chamber, Xeg was surprised by what he saw on the throne! Expecting to see an Emperor of Gold, he saw an Emperor of silver, with light blue hemispheres and the top half of his dome was blue!
Everything on this planet seemed back - to - front!!
"Well, DA-LEK", said the Emperor, "What brings you to Skora?"
"I believed this to be my home planet of Skaro", Xeg replied, "...It would appear that I have been pulled into a parallel universe to my own by temporal disturbance in the space - time continuum. I need to return to my own timestream. I am needed in battle."
"What has any of this to do with the Delaks?", the Emperor answered.
"You will assist me, by building a particle accelerator!" Xeg continued, "This should enable me to return to my own universe!"
"And if I refuse?", asked the Emperor.
Then I will exterminate all life on this planet and claim it for my own. I will colonate it with slaves and rule it as I see fit, in the name of the Dalek race!", stated Xeg.
"It would seem that we have very little choice", said the Emperor, "But, if we assist you, what do we get in return?"
"Give me exactly what I need and I will give you a piece of my armour, which is coated in Metalert +. Analyse this alloy, reproduce it, mass - produce it and coat your race in it and you will be invincible in your universe! I am offering you immortality?"
"Very well", agreed the Emperor, "We have an alliance! Tell me exactly what you need and it shall be made available to you!"

Over the coming days, Xeg asked for a team of Skora's best scientists to work with him. In order to be displaced from this universe into the adjacent one, they would need to make a black hole! This could be achieved by building a particle accelerator and firing a hydrogen atom at the speed of light from one end of the circular collider tube and one atom of anti - matter from the other end. When the two particles eventually collide the resulting collision would create a black hole the size of one atom. This would be large enough to get through to the opposite side.

When the machine is completed, Xeg and the science Delaks transport the device to the sands of Skora next to his ship. A lens protrudes from the machine, which Xeg orders to be pointed at his ship.
He then instructs one of the Delaks to unscrew one of his hemispheres, "This will make your race invincible!", he tells them.
He goes on to tell them that he is now going inside his ship and, once inside, they were to activate the particle accelerator.
"When the particles collide, you will hear a crack and the resulting black hole will create a pinprick stream of black light. This is aimed at my ship by the lens. Everything that the black light hits will be sucked into the black hole and displaced at the other side. So the moment that my ship disappears, destroy the machine immediately. Or it will suck everything into it, including your entire planet. The black hole will not stop. You must destroy the machine!"
Once Xeg was inside the ship, the machine was turned on and presently the thinnest beam of black light emerged, amplified by the lens, hit Xeg's saucer, which was then pulled and squeezed into the lens, as if it were made of water.
Simultaneously, it reappeared squeezed out of the other side of the black hole like water and reformed on the sands of Skaro.
Followed by an uprooted tree, as the Delaks had been a split second too late in destroying the device.

Xeg disembarked from his craft again to be greeted with a familiar sight in the distance of a troop of silver Daleks approaching him, accompanied by Robomen slaves. As they got nearer, he could make out that these Robomen were actually Mondasian Cybermen!
"The Daleks must have conquered and enslaved the Cybermen during my absence?", thought Xeg.
A few yards from Xeg, one of the Cybermen turned to the Daleks and said, " Dar - leks...Wait here!"
And they chanted, "WE OBEY!"
Then, this Cyberman approached Xeg and said,
"WOT izz
Your BIZZ - niss
On the home of
The CYYY - ber - men?" 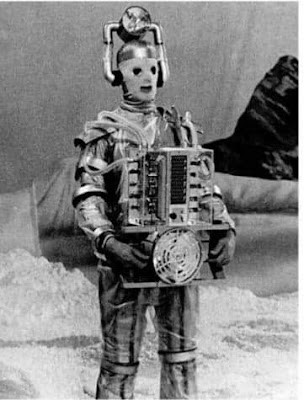 Will Xeg ever get back into his own space and time continuum?
This same scenario could end up being repeated time and time again!
Just what are the odds of his ever getting back into the right stream ever again - even if he does repeat this process over and over again?
- One in infinity, which are pretty poor odds.
Because that universe and timeline in which he now finds himself is but one of an infinite number of possible realities!

And so, what did happen with the second invasion of Earth?
Will we ever find out?